Films in the Attic: The Pit

Welcome to a new segment on Gorehound Mike`s! Its called Films in the Attic and here we showcase some strange oddball films that seem to slip through the cracks, but should be rediscovered. Because as I`ve said before the fun of doing this blog is helping fans discover new weird strange cult and of course horror films. 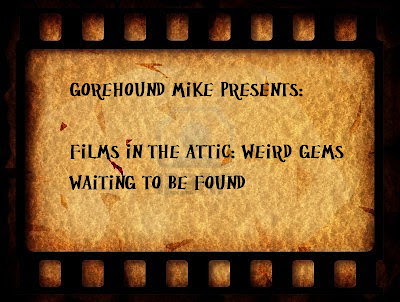 Today in the attic, we have a strange film about a perverted boy, a Teddy who guides his misadventures and hairy trog creatures. 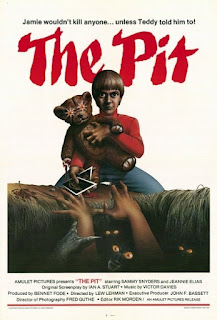 
Jamie wouldn't kill anyone...Unless Teddy told him to! The tag line says it all folks. This is one strange little film.

The Plot: Jamie is a young yet weird child, who has no friends expect a creepy stuffed bear. Hobbies includes running around the town stark naked wearing a cape and playing with his pet bugs.  As with most young men his age, his attentions have been more towards women then his insect friends. So much to his delight, Jamie is left with Sandy a young college psychology student while his parents are away on business. Teddy his only friend talks to Jamie and often misguides him into doing crazy things. Soon he begins to grow a unhealthy obsession with Sandy which starts out harmless and begins to get borderline psycho. To make things more interesting Jamie discovers a pit full of hairy ape like trogs. Soon Jamie seeks revenge on the people who pick on him in town. But the trogs seem hungry and it may be only a matter of time before they out grow the pit and start looking for more food!! 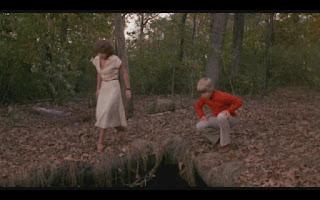 The Review: I discovered this film years back when Anchor Bay put it out on DVD paired with Hell Gate. And while Hellgate should have been left in Hell, I did really enjoy The Pit. This is totally a film I put on for a friend who just stares in disbelief of how bat shit weird it is. Right off the bat your taken back by Teddy the bear that prompts Jamie into the bad things he does. Is he actually alive or is he part of Jamie`s psychosis?  Whatever the case may be it sure does add the wtf element.

The cast does a very capable job in there performances, considering the material there were given. Sammy Snyders who plays Jamie does well at making him ubber odd yet at times sympathetic

Every child whose ever been made fun of and picked on often have fantasies of how cool it would be that seek revenge on there tormentors so I think when Jamie uses the trogs, its kind of satisfying to see it happen.Not to mention at times funny.The Pit has a totally dark sense of humor, which is its major saving grace. I mean we got a prevented 12 year, a talking Teddy and a pit full of hairy apes, you almost have to not take yourself seriously. And anytime an old lady gets it, its always makes for some good entertainment. The end is very clever as well. No spoils but its a very cool way to end the film. While this may not be the best film you`d ever see, if your looking for something different, strange and ultimately entertaining then take it from Teddy and watch The Pit or you just might find yourself down there....

Posted by Gorehound Mike at 1:53 PM