Confessions of a Monster Kid: C.Courtney Joyner Interview Part 2 Class of 1999 and Beyond!

Welcome to the second and final part of my interview with C.Courtney Joyner. Class of 1999 and beyond! 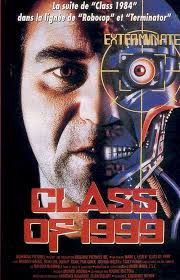 CJ: I got hired to do "Class of 1999" directly because of "Prison" Mark Lester actually went to a screening of Prison and of course he and Irwin are very good friends forever and Mark mentioned the project and he needed to hire somebody for it and so Irwin recommended it to me. I went in there and Mark was co-producing the movie with writer Stanley Mann. It was a long process on that. I wrote acouple of drafts and other writers came in and they wrote drafts and they were discarded, Mark came back to me and I worked again and I left (laughs) it was a back and forth a whole bunch but ultimately it came back to me and my old script but it was alittle frustrating but I think that's the way Vestron would do it. They had a long development process and than when we got back to Seattle I said Oh my gosh this really is my old script, it had been tinkered with and improved like some of the dialog but then I rewrote the final shooting draft when we were in Seattle and what was wonderful about that was when I was there we knew who our cast was. So I rewrote the teacher roles for Pam Grier etc. because they had been cast. It allowed me to reshape the roles for them. It took a long time for that movie to shape. 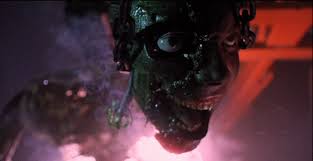 The biggest thing on that film that I regret was we had a great special effects man on that show named Eric Allard (Spider Man,MI:3) and of course the Burmans worked on it which was great because they worked on "The Offspring" (From a Whisper to a Scream) but I came up with this idea at the end, because I didn't want to do the terminator teacher thing, what I wanted to do was each one of the robot teachers had a specialized equipment, like Pam has the flame thrower Kirkpatrick has the rocket off his arm and originally what was going to happen was the individual pieces of there skeletons came together to create this new creature that was really more like an insect rather than humanoid. I`m sorry we couldn't do that they thought it would be to expensive and Mark said about possibly doing it with stop motion but it was beyond what Vestron wanted to spend and so they built that full scale robot, that was the real deal. It was suspended from a track on wires above it sort of like a extremely heavy complex puppet. It was a wonderful creation.

GM: Its a great movie that has a lot of fans.

CJ: The movies cult reputation has grown over the years, we had such a wonderful cast. I loved John P Ryan and Pam Grier they were so terrific and Malcolm and Stacy Keach that was cool, that was a wonderful experience once we got going. And of course Eric had done "The Blob" so when we wanted to do that thing with the kid being folded in half and being pulled into the wall that was a great gag and he did all that stuff, he was terrific.

GM: Any word on a blu release of this film?

CJ: Mark has talked to me a few times about doing a blu ray with it but I don't know if maybe "Scream Factory" (Shout Factory) decides to do it. For all I know the blu is coming out tomorrow (laugh)

GM: Speaking of blu, are you happy with how your films look on the format?

CJ:David DeCoteau and I did the commentary for Puppet Master 3 and I was stunned when we were recording that how great it looked, it was fantastic. One of the saddest things which Renny and I have discussed when we saw the blu of "Prison" and the fact that Mac Ahlberg hadn't lived long enough to see it because I think it looks just superb and he was an incredible DP. To me the great thing for us to re-discover your own work and you look at these things with fresh eyes because I don't sit and watch my own movies for hours on end then suddenly your seeing things brand new and its neat and when its in this great format and it looks so far beyond quality upgrade even when we made it (laugh)

GM: Lately you`ve done a lot of interviews for various documentaries, would you call yourself a film historian?

CJ: I`ve always done film journalism and before it was journalism it was just me being a pain in the ass to all these guys. When I was in High School I was writing letters to Don Siegl and all these guys. I have a letter from Don Siegl which is one of my great treasures and I got to know Don abit later on when I came to California. I had the unbelievable gull to write to him and ask for a summer job. His note was so great. He had just finished doing Telethon with Charles Bronson and he was getting ready to direct a movie called I.Horn starring Steve McQueen and I still have the letter, it says he's sorry he cant hire me because Steve McQueens entourage was so large (Laugh) OH MY GOD Steve McQueen is stopping Don Siegl from giving me a summer job and that is like the coolest thing of all time. But I was always doing that and I came to California to go to college and that's what I would do, the thing is back in those days, (laugh) well those days, not that long ago but I guess it is movie directors and guys like that did not consider themselves celebrities they were wealthy of course and well paid and they had there own degree of fame and cult status but they still considered themselves anonymous people. And if they got attention or met a fan they were flattered because they wanted to stay out of the spotlight and put guys like John Wayne in it. Times were very different and they were very open to fans like me who would come and bug them etc. I liked tracking down the Universal guys. I just loved that, tracking these guys down and hearing old Hollywood stories and what have you. Then when I started really applying myself with the film journalism that kind of took more of a shape with me with the Westerns and I got very involved with that and continue to be involved with that genre. That kind of up things especially when I got to know people like Sam Peckinpah Warren Oats and L.Q Jones  and the whole gang and I was kind of there mascot and that lead me down a new path way.

GM: You just did an interview for the Empire documentary?

CJ: The Empire documentary is going to have a big big launch but I don't know when that will happen but again that Daniel Griffins work and holy smoke hes talked to everybody its going to be an incredible.

GM: I know you`ve done conventions in the past, is it humbling to meet fans of your work?

CJ: I haven't done one in a very long time, when I would do them a million years ago it was always in conjunction with Full Moon. Charles Band was very convention savoy and he was of course great with his promotions, when I started writing a bunch of Full Moon and directed a few times he always wanted to have a presents at the convention and he liked it to be the actors plus the behind the scenes people which was very nice. So that was really fun. I guess the wonderful thing about when you do that is you sometimes you don't realize the how much exposure the stuff actually gets. These are horror flicks there not the Godfather (laugh) so your not sure how many homes these things go into or what.

CJ: Oh gosh I still get stuff through the mail and that's always a great kick.

GM: So what projects do you currently have in the works?

CJ: I have the sequel my western Shotgun which comes out from Pinnacle like a year from now called Shotgun 2: Bleeding Ground. I started a new action/adventure series which I cant disclose. I`m writing a western shortly which i`m very excited about actually for a tv pilot also looks like i`m going to be doing some work in the UK for a Ileen Maisel who produced "The Golden Compass" and i`m writing a tv pilot for her company.

I want to extend my thanks to C.Courtney Joyner for taking the time to talk about his amazing career.
Posted by Gorehound Mike at 8:28 AM