Hollyweird Here I come! "Maps To the Stars" Review

Maps To the Stars

With such genius films as "Shivers" "Scanners" and "The Brood" just to name a few, Cronenberg is the last and final word in body horror, the man single highhandedly made the sub genre. In recent years however he has shifted from this but still retained his razor edge weird style that fans have came to love. With his latest he takes a stab at Hollywood..Or maybe Hollyweird?

Hype as we all know can be a slippery road. Sometimes it can be well deserved and other times its full of hot air.  The buzz was louder than on the set of "The Fly" and the verdict was that "Maps to the Stars"was a film not to be missed. But atlas even us critics can be wrong at times.  In the case of this film, it was not. This dark twisted comedy satire on the horrors of Hollywood is the most fun watching a film in a long time. I`m someone who already loves films about how dirty and sleazy the business is and Cronenberg takes this to a whole other level, taking sheer mad delight in rubbing our noses in it. I think it taps into the huge fascination with celebrities and the the "glamour" of Hollywood and plays like total camp. Not since Billy Wilder's "Sunset Blvd" has there been such a genius, disturbing and humorous take on the underbelly of tinsel town. Wagners screenplay is powerful with compelling characters,great drama blended perfectly with surreal comedy that gets pretty black. You have all the Hollywood types in the film, the bratty child star, the has been wanting her come back etc. Even the young jaded girls in the club that think anyone over 20 is an old hag. And lets not forget the working stiff trying to become an actor and screenwriter (of course.) 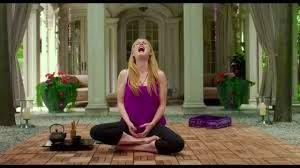 The use of recurring themes and the "haunting" as personal demons metaphor is another stroke of brilliance. It is weaved into the plot and doesnt feel like it was just random weirdness. The cast of Maps is top notch with Julianne Moore, John Cusack,Mia Wasikowska and Robert Pattinson (yes the Twilight heart throb) along with a fun cameo by Carrie Fisher playing who else Carrie Fisher. Moore lately has been making better film chooses and she is fearless in the role of Havana Segrand a washed up actress whose legacy is mainly built on her Mothers cult fame and tragic death. She really lets it all hang out and really gives it her very best. Also nothing tops seeing the now Academy Award winner taking a shit while talking to Agatha Weiss (Mia Wasikowska) fart noises and all. Funny sure, but it also takes a lot of balls to do that. Even Cusack whom I`m not a big fan of, does a very good job as a hacky shrink who cares more about the dollars than actually helping people. He and Mia have a scene together; its a reunion of sorts and he plays it both ice cold and strangely tender, the two worked so well together it makes for a very weird moment. The only actor I thought was the weakest was Pattinson whom it seems Cronenberg has found a muse in.  Honestly its not the fact he was in the tween vampire series that colors my opinion of him, hes just simply is not a very good actor. When you are in the movie with so many heavy weights you really need to bring your A-game and what we get is very wooden phoned in performance. 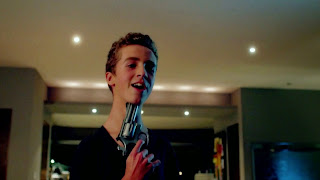 Maps to the Stars is one the best movies i`ve seen recently and I can honestly only see myself viewing this another 100 times or so. Cronenberg peels back the slick polish of the Hollywood system to show a very dark perverted rotten side that will surely leave you with a mixture of feelings but overall its a thrilling ride!

Posted by Gorehound Mike at 7:43 AM