The great thing about horror sci fi and cult films is there's a huge vast array of films to discover, and no matter how many films you`ve seen there's always lots more to discover right around the scary bend. Here are some films that are rarely written about or seen. Hopeful I can turn someone on to there next favorite movie, which is why I enjoy writing blogs and articles in the first place. 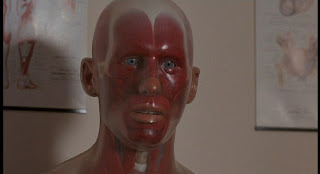 5- Brain Damage- From Frank Henenlotter the warped mind that brought us such titles as Frankenhooker and Basket Case. This is a truly demented funny and enjoyable flick. It needs to be more widely seen, cause while it may not be Franks best film, it certainly ranks up there.

4- Pin- Dummies its horror film 101 that there creepy as hell. But there's a nice twist in this tale of a boy and Pin a plastic medical dummy. Great acting and moody set pieces and a hell of a cool ending makes this a must see. Its not hard to find as its on DVD but alas no blu ray. But just wait because there's a planned remake which im sure there will be a re release when it comes out.

3- Fade to Black- I feel its safe to assume that most of you out there a huge film buffs. This is such a treat for all us nerdy (yes im a film nerd and proud of it) film lovers. The plot is simple, a young film lover slowly loses grip on reality and descends into madness and starts killing people that bully him, only he`s dressed as film characters. This is but no means a masterpiece of horror cinema it is however a fun guilty pleasure for rabid film fans. The DVD has been LONG out of print and its worth waiting for the blu ray.

2- Duel- Long before Stephen gave us Indiana Jones or the sickeningly sweet E.T  he made Duel! A simple but bad ass film that proved that back in the day Spielberg could take so little and deliver a punch to the audience. Plot goes like this man cuts off truck, truck driver is not happy-a deadly cat and mouse road game ensues. Sounds dull? Well its anything but. Due to the success of Duel, studios gambled on Stephen for a shark movie, and we all know how that worked out! Not hard to find, DVD might set you back 10 bucks but well worth it. Don`t believe there's a blu ray edition out yet.

1- Bird with the Crystal Plumage- Dario Argento to horror fans hes the first name in Italian horror and the father of the modern gallio. BCP is Darios debut and wow right out of the gate he pulls no punches to give the audience a tense, tight well plotted and gruesome film that will stay with you for awhile. A young writer goes to Italy to inspire him to write but gets allot more then he bargains for when he witnesses a female nearly murdered. Thus begins a who dunno-it that will keep you guessing til the last frames. While I think his best work was to come, for his first time out he really showed us that with a small budget he could give us a great thrill ride which keeps you on your seat. This might not be a film for everyone, but if you like a good mystery thriller then this birds the word!!